Home/Blog/Success Comes in Cans Not Can Nots

Success Comes in Cans Not Can Nots 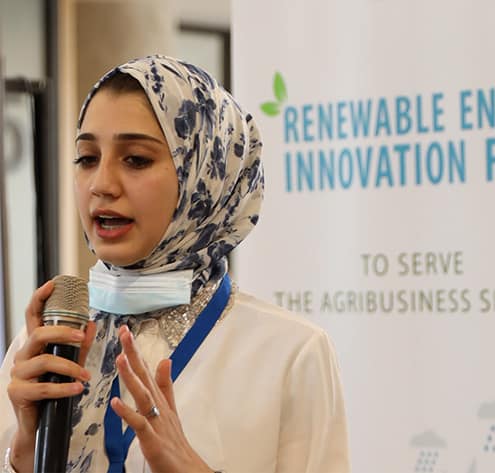 Awad Zayoud, Rushdi Zaid, and Hala Abu Ayyash are three ambitious individuals, that met during their study years at the Faculty of Agricultural Sciences and Technologies at Palestine Technical University—Khadoori.

The friends decided to team up and apply for the AgRE-Minds Hackathon out of curiosity after seeing a post on social media. During the hackathon, the team met Jamileh Sabarneh, a Sustainable Energy Engineering graduate, and the idea caught her eyes; hence, she joined the team. The team’s innovation is called Ecogas, which is a solution for converting plant and animal waste into biogas and organic fertilizer. Though they were excited about bringing their new idea to life, the team lacked the technical expertise in the field.  This made them reach out to one of the participants in the Hackathon, Ahmad Shawahneh, a Mechatronics Engineering graduate from BirZeit University, who provided the team with technical support.

In the beginnings, working together was slightly challenging for team members as none of them had ever worked in a professional setting before. However, they were all aware that they had to figure out a way to work as a team to succeed.  Hence, they dealt with large tasks by breaking them down into subtasks and assigning them to each member, allowing work to be completed effectively and efficiently.

“We honestly didn’t think we would win! Our main reason for joining was to enhance our knowledge about new trends in the agricultural field and connect with entrepreneurs in the sector” – Rushdi Zaid

After winning in the hackathon, the team was granted the chance to enroll in the incubation program, where they underwent intensive training in various topics. Rushdi said, “Most of the information presented about renewable energy in the hackathon and incubation was brand new to us.”  He continued to say, “In comparison to other workshops we attended, these training sessions stood out the most for us. Incorporating hands-on training made the  sessions more engaging for us.” Members of the team reported a shift in their perception of renewable energy as well.  They recognized its importance and impact on the future as well as its potential when applied in other business areas.  This is evident by how Rushdi and Jamileh both applied what they have learned from the incubation in their personal businesses.  According to Rushdi, “I am in the process of switching to burning natural gas produced by the prototype to keep my strawberry farms warm during the winter.” Jamileh seconded Rashid’s opinion and said, “I will begin using renewable energy in my personal business, which is a fruit dehydrating operation that is too expensive to run using traditional energy generation methods but becomes extremely profitable when renewable energy is used.”

Through the incubation, Ecogas got to connect with people from the industry who supported them in the development of the prototype. They met Dr. Rowaida Ali from Birzeit University who has played an important role in the prototyping process and experimentation due to them struggling in finding the needed technical support for the renewable energy component. Awad explains, “Expertise in this field is limited in Palestine, as is the number of renewable energy projects. Most existing renewable energy projects are solar powered. We only found one project that uses biogas, and the project’s supervisors were hesitant to provide any information.”

The team received the funds needed to acquire the prototype’s resources, which they designed, developed in accordance with the required standards, tested and approved by a specialist, and is currently being experimented.  So far, the test has shown promising results.

Following the hackathon, members of the Ecogas team participated in a variety of entrepreneurship-related activities. For instance, Rushdi and Awad won second place in Palestine Technopark’s agricultural hackathon titled “Cocreate My Future” with the Ecowater pitch. Jamileh took part in a Kuwaiti government-sponsored training in Jordan on how to build a startup from the ground up.

The team intends to grow their business in the future.  A key aspect of this growth will be their ability to customize solutions for each customer based on their specific needs including the size and scale of the solution to increase the added value of the solution. This requires additional data collection through multiple experimentation during the upcoming four to five months.

“Convincing customers with a renewable energy solution is a challenge since people here are still unfamiliar with the concept. That is why Ecogas plans to use effective marketing that highlights the many benefits this solution provides on a personal and ecological level.” – Rushdi Zaid